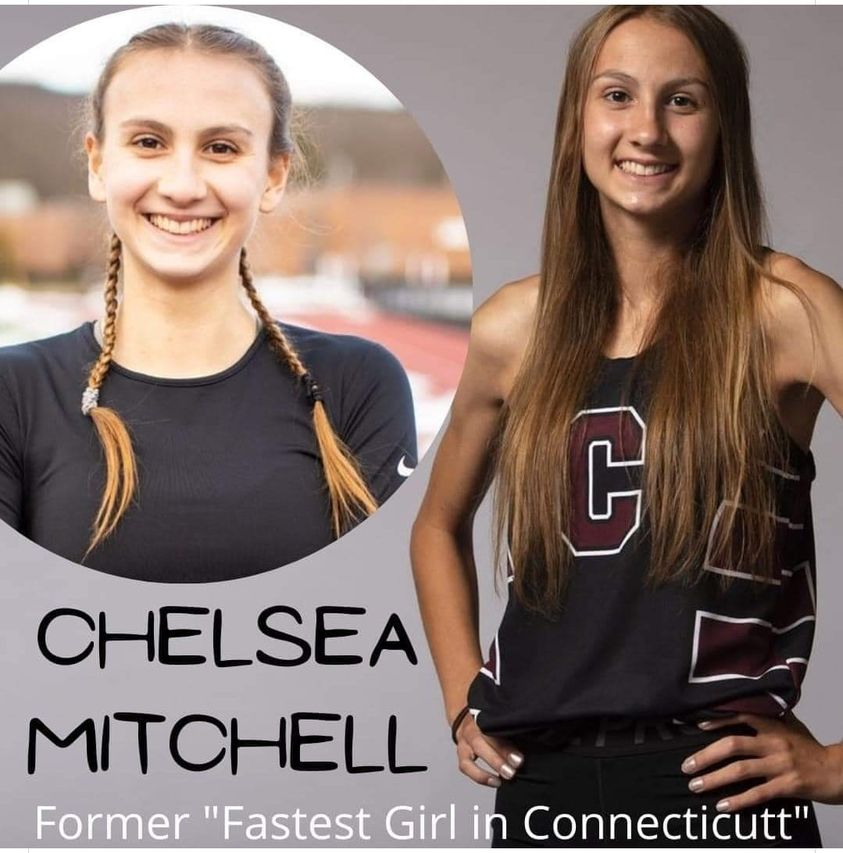 The words of Chelsea Mitchell:
"They used to call me 'the fastest girl in Connecticut.' But I couldn’t outrun an injustice.
For four years, I competed as a high school runner and made it to the state championships every one of those years. But in my junior year, I lost four of the state titles I earned to males who identified as females.
They give awards based on who wins—typically the person with the strongest muscles, the greatest lung power, the fastest speed—not based on how a person identifies. At the end of the race, it’s about biology, not gender identity. And no amount of testosterone suppression can change a male’s innate physical advantages, like bone structure and muscle mass.
And fast as I am, I can’t outrun those advantages. Or the injustice that protects them.
For saying that out loud, I’ve been branded by some as a sore loser and a hater. But what I object to has nothing to do with hate.
Female athletes like me make a ton of sacrifices to compete—working tirelessly to shave fractions of seconds off our personal times and giving up what many would consider the "normal" teenage life by watching what we eat, skipping parties for practice, going to bed early to get up early and practice yet again. It becomes almost like a career. And we do all this while working hard to earn scholarship opportunities with preferred colleges and universities.
It’s all worth it to us because we know we stand a chance at victory against our fellow female athletes—but not against those who aren’t biologically female. It’s demoralizing to see all that effort and sacrifice as futile, where we are punished for a biological reality we can’t do anything about.
And that’s what’s been happening on high school and college campuses across America for the last several years. With the permission of coaches and administrators, as well as those in leadership at the National Collegiate Athletic Association, some male athletes have been pushing their way onto women’s sports teams and playing fields. With their physical advantages, they’ve been taking the positions, the wins, and the opportunities so many women and girls have worked so hard—often their entire life—to obtain.
When women protest this—objecting to seeing the rewards for all our hard work go to competitors with a biological edge we can’t hope to overcome—we’re accused of hatred and bigotry. But the issue is fairness. And the people who should be protecting us and defending our rights are letting us down, time after time.
Last fall, it was the International Olympic Committee, making way for male-bodied athletes to more freely compete in women’s sports. This month, it’s the NCAA, offering a complex and confusing list of directives that basically pass the baton to the governing bodies of individual sports. But then USA Track & Field, for example, points to the IOC policy, which points to other national and international bodies. The baton just keeps getting passed round and round and round.
Everyone in leadership seems to want someone else to take responsibility. Many of them are understandably scared that a minority of loud activists are going to take aim at their sport, their school, or them personally. So, they’re throwing female athletes under the bus, hoping we will eventually be quiet and all the commotion will eventually go away.
If it does, women’s sports will become a thing of the past.
There’s no way athletic administrators in every sport can’t see this. If biological males move into women’s competition, they will dominate whatever contests they enter. Eventually, nearly all the titles, all the scholarships, and all the opportunities to compete, earn scholarships and endorsements, and one day maybe even coach will go to the ones with the anatomical edge.
That’s just biological reality, and the leaders of sport are deliberately turning a blind eye to it.
Under Title IX, they have a legal obligation to protect female athletes from this unfairness, but—just like the Connecticut Association of Schools, which I and other girls sued through our attorneys with Alliance Defending Freedom—they’re not doing it. And that must mean that the dreams of women, the opportunities for women, the rights of women just don’t matter. On the playing field, or under the law.
Which means there’s a lot more at stake here than a footrace. Or a swimming event. Or an Olympic title. This is about what we think of women in America. This is about what’s safe and fair.
And that’s a responsibility our athletic administrators can’t outrun." 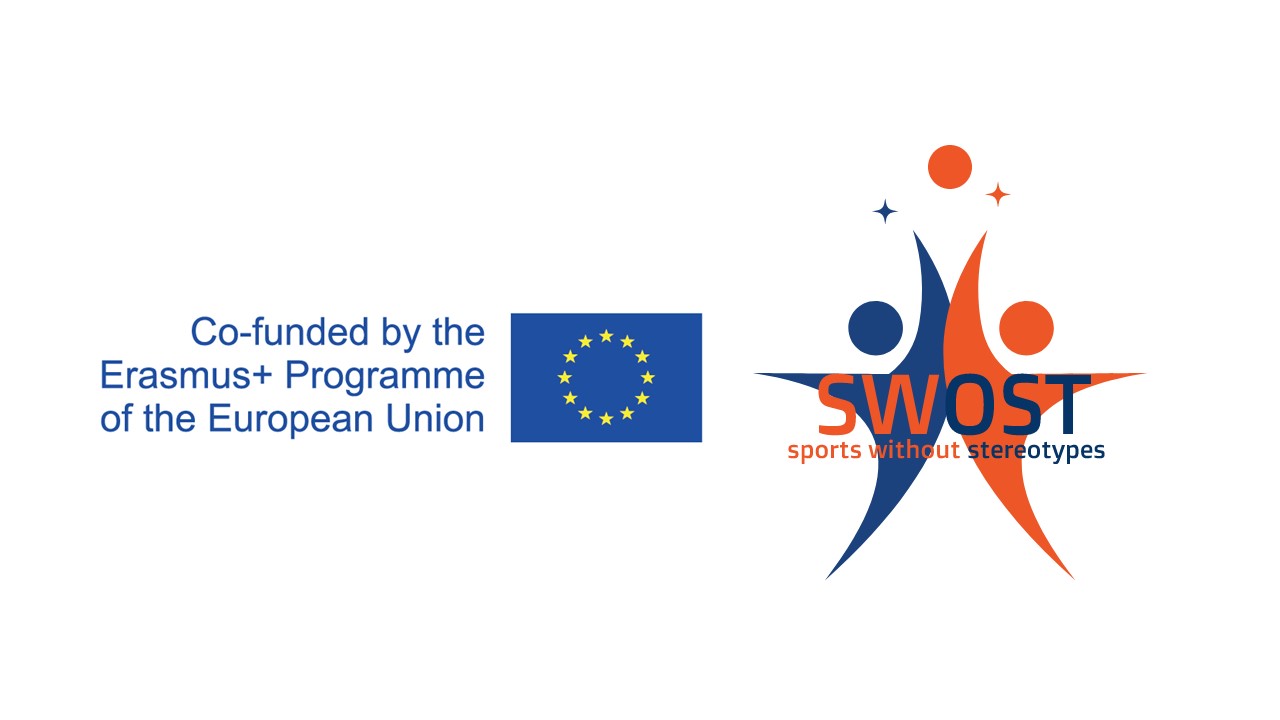 Representatives of the BMX project "Training to Win" meet in Zaragoza 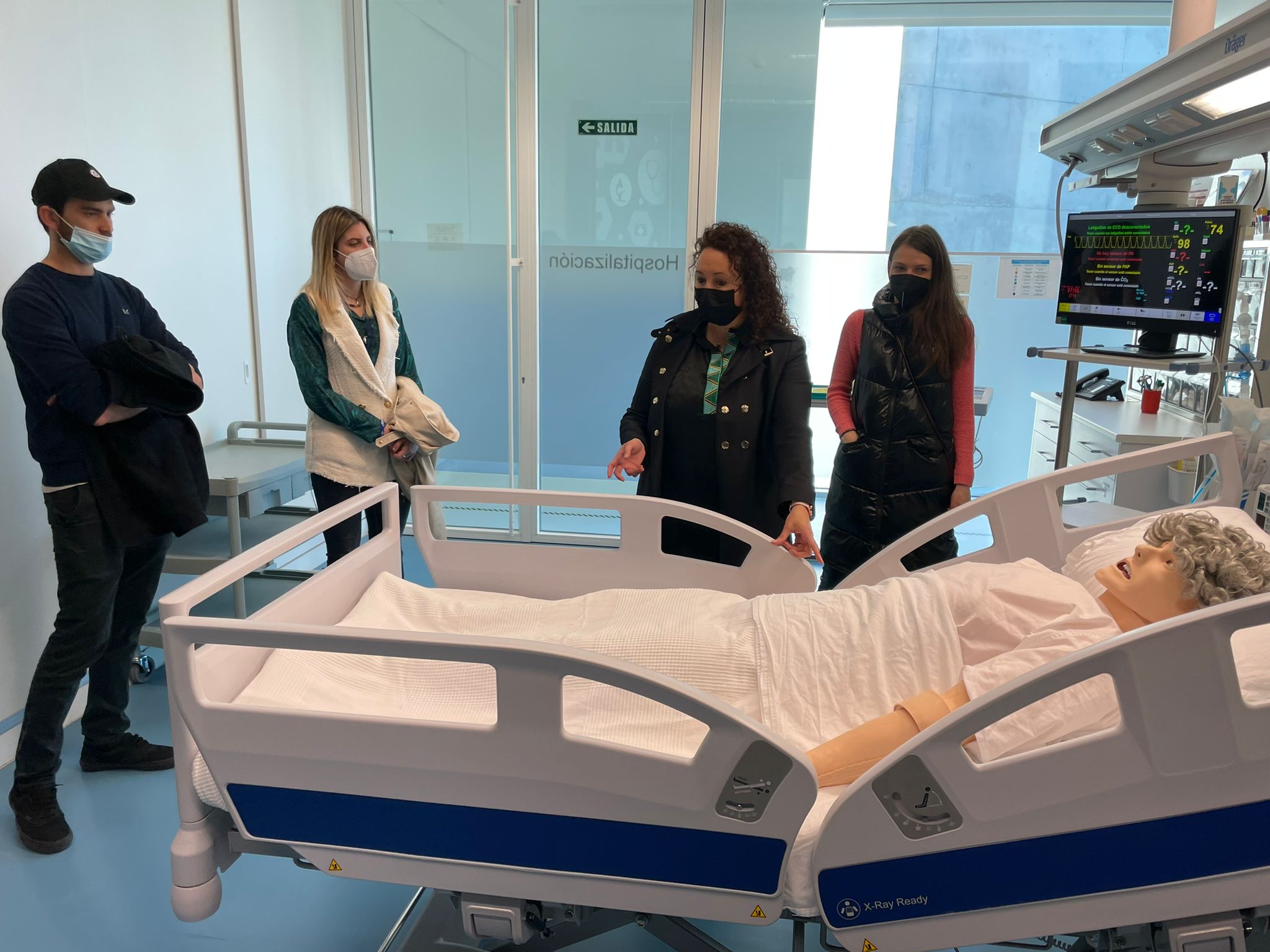 A few days ago, representatives of the Latvian team of the project “Training to Win” returned from the Spanish city of Zaragoza - LSIIDP project manager Sandija Zaļupe and Valmiera Sports School BMX coach Olafs Lakučs. The 2nd Transnational Meeting was held in Zaragoza, where the project partners - Zaragoza BMX School, Saint Jorge University, Portuguese Cycling Federation, International Center for the Promotion of Education and Development CEIPES (Italy), Slovak Cycling Association and Malta Street Sports Association - continued their work on BMX coach training program development. The program as an open education resource will be available to all those involved in BMX sports in Latvia and throughout Europe.

"On the first day, we got acquainted with the work of the sports science laboratory of the University of St. George. They have all the necessary resources - technical support, specialists, databases to conduct high-level research in the field of sports. These laboratories have also become part of our project research. After a visit to the university, a representative from each Member State presented the progress made in developing a training course for BMX trainers. In the course, the Latvian project team develops the topics “BMX competition” and “BMX season planning” and “Improvement of the start technique”, as well as creates a section on training methodology. Italy, for its part, will turn the materials and training program developed by the Member States into an online tool that is easy to read, easy to use and serves as a guide for trainers. On the second day of the meeting, we discussed the communication issues of the project, ”says S.Zaļupe.

"We - coaches - are more practitioners, but, of course, our work is unthinkable without a scientific theoretical basis. In the project, by developing a training course for BMX trainers, we invest our previous experience and knowledge and work together to prepare high-quality training material. The course will consist of 3 sections. The theoretical part will cover general topics such as sports psychology, pedagogy, anatomy and others. The content of the specific part is directly related to BMX sports - rules of the sport, technique, tactics. The third part is devoted to practical lessons, including photo and video materials,” points out O. Lakučs.

Thanks to the Spanish partners for hosting!

The project "Training to Win" is co-financed by the European Union.

"Training to Win" Latvian team goes to Zaragoza in Spain 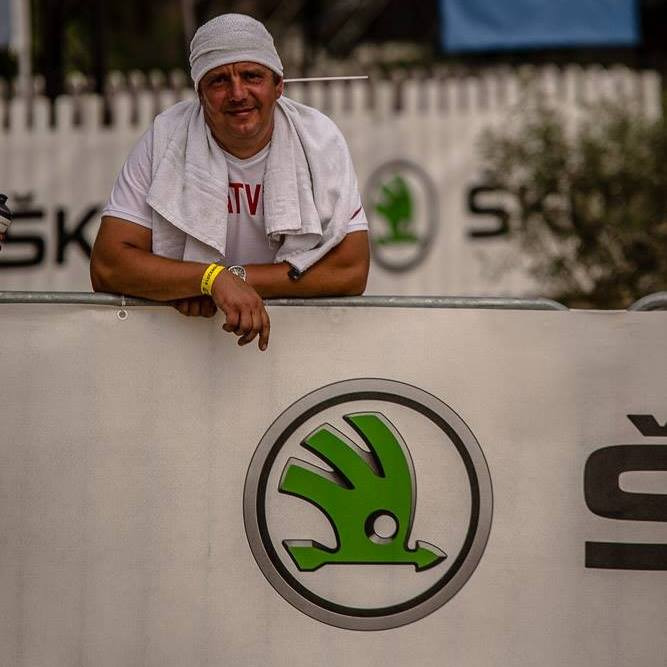 From April 20 to 23, part of the Latvian team of the project “Training To Win” - leader Sandija Zaļupe and BMX coach of Valmiera Sports School Olafs Lakučs - will go to the Spanish city of Zaragoza to meet with project partners and continue work on the development of the BMX trainer training program. This time, the coach of Smiltene Children and Youth Sports School Renārs Auga will not join the team, but his contribution to the development of the training program is invaluable.

It should be reminded that the Latvian side is working on such topics as “BMX season planning”, “BMX competitions”, “Improving the start technique”, as well as creating a section on training methodology. The training program is planned as an open education resource, so it is available to all those involved in this sport in Latvia and throughout Europe. It will be a guide for coaches, especially those who want to move from rider status to coach and have a wealth of practical experience, but need to supplement and strengthen the theoretical knowledge base in this sport.

The training course will include several sections, namely, the theory of general competencies in sports, specific content specifically required for BMX sports, and practice in which theoretical knowledge can be applied in practical training.

The Training to Win project is co-financed by the European Union.

Information about the project in Latvian is available in the “Projects” section of the LSIIDP website here.

Information about the project in English is available on the website of the project “BMX - Training to Win” https://trainingtowin.eu/

The youngest basketball players restart the sports engine with relays 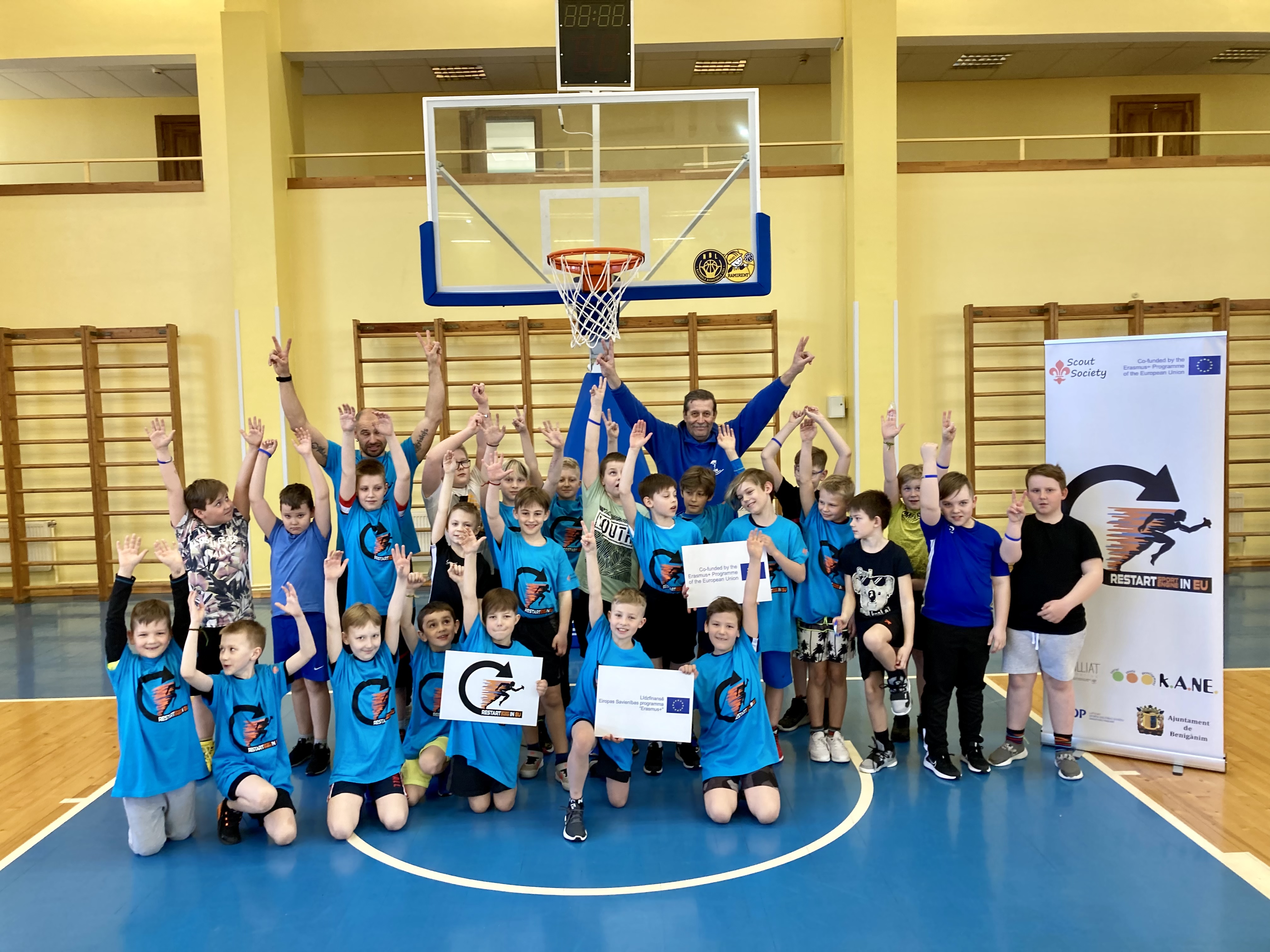 On April 21, the gymnasium of Limbaži Secondary School had an exciting atmosphere. Here, basketball players aged 10-11 proved their athletic ability by participating in basketball relays organized by coaches Kristaps Zaļupe and Jānis Skuja within the framework of the Erasmus + program project “Restart Sport Engine in EU”.

Before the start of the activities, K.Zaļupe gave the young contestants both special project T- shirts and bracelets. This encouraged and strengthened the boys' determination to start as well as possible. And then the coaches' whistles sounded and the relay could begin. Drifting between cones, accuracy in free throws, shouts of joy for every ball thrown into the basket, team spirit and coach's encouragement proved that the young basketball players devote 100% to their sport and strong motivation is the merit of coaches.

The Restart Sport Engine project aims to improve people's skills in the five project countries - Latvia, Romania, France, Spain and Greece - through various sports activities, to improve the skills of coaches, sports teachers and sports volunteers to use innovative sports tool, and to resume sports movement in Europe after the Covid19 pandemic. These relays met the goals set in the project and proved that young athletes are more than ready to play sports again with great dedication and determination, while coaches - to motivate, encourage and find ways to put young athletes' excitement and abilities to the right level developing a strong, motivated and knowledgeable young generation.

In the end, all the participants were satisfied with the great sports matches they had played. The taste of sporty victories was made even sweeter by the prepared snacks. 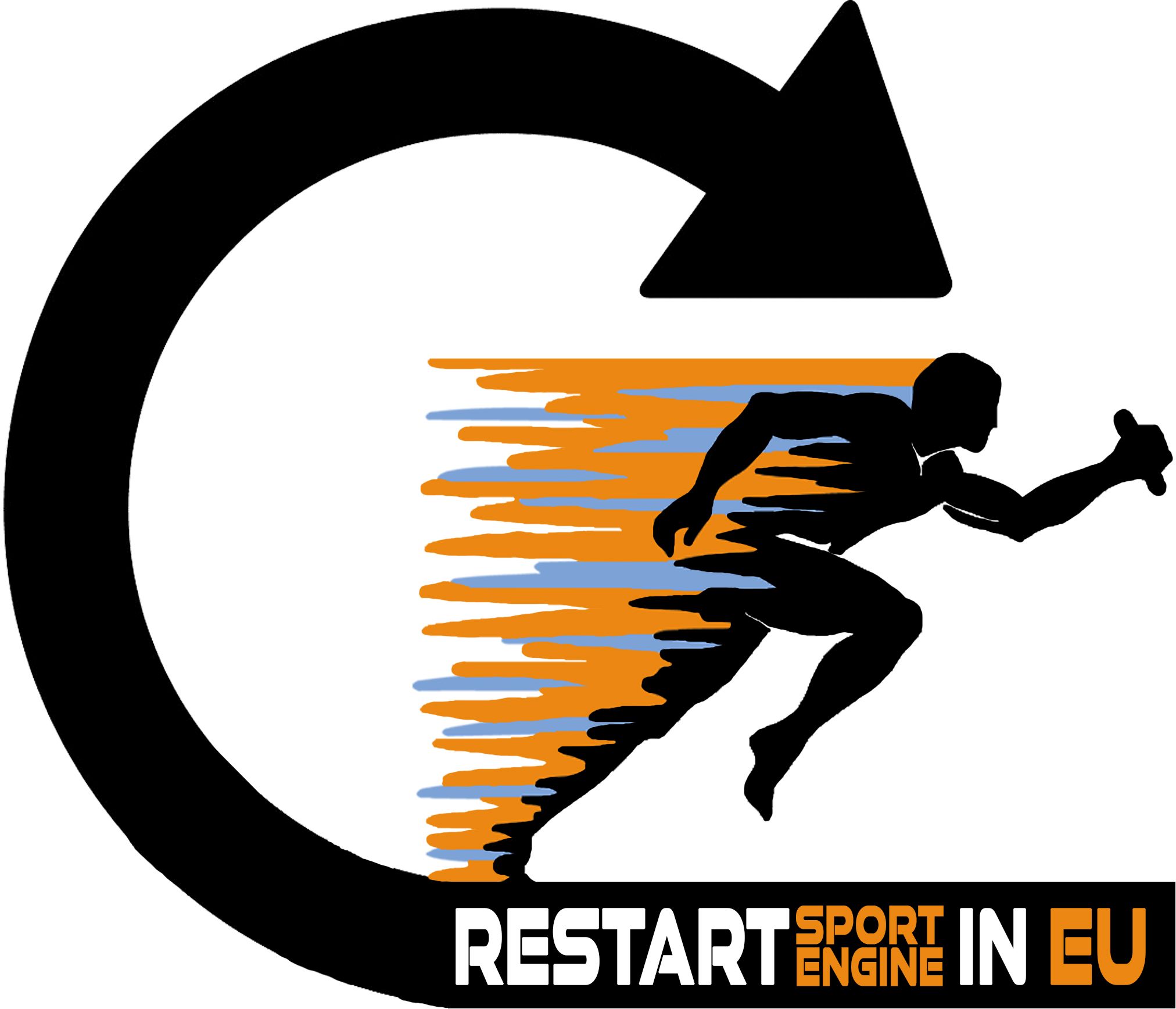 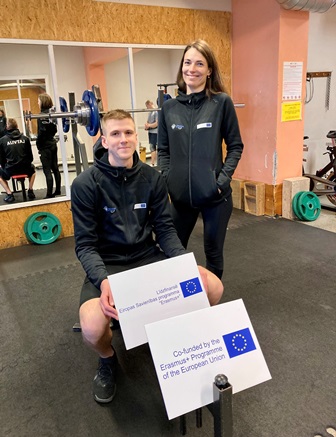 On Wednesday, April 13, the trainers' working group of the project "Training to Win" implemented by LSIIDP will meet online to discuss the development of the training program for BMX trainers. During the meeting, the Latvian side will be represented by Renārs Auga, the coach of the Children and Youth Sports School of Smiltene, and Olafs Lakučs, the coach of the Valmiera Sports School, as well as Sandija Zaļupe, the project coordinator. Our trainers develop such training course topics as “BMX competition” and “BMX season planning”, while S.Zaļupe creates a section on training methodology.

It has already been reported that the training program will serve as a guide for coaches, especially those who want to move from rider status to a coach and have a wealth of practical driving experience, but need to supplement and strengthen their theoretical knowledge base in this sport. The aim of the project is to promote education in sport, with a special focus on the development of skills needed in BMX sport and the training of coaches to improve the safety of sporting careers and young athletes.